The Bunker RDA by Asmodus is a 24.5mm single coil atomizer, it is delivered in a cylindrical box, with a printed brand logo and atomizer name.

The box Mod is unscrewed from below and once the cover has been removed, we find, in addition to the two Allen keys provided, one that is needed to replace the pin, the other to tighten the coils, a small bag containing spare parts, two Omni coils (triple fused 26ga * 3 / 38ga) and the user manual.

Then by pressing on the upper part we will be able to access the Bunker and the replacement glass. 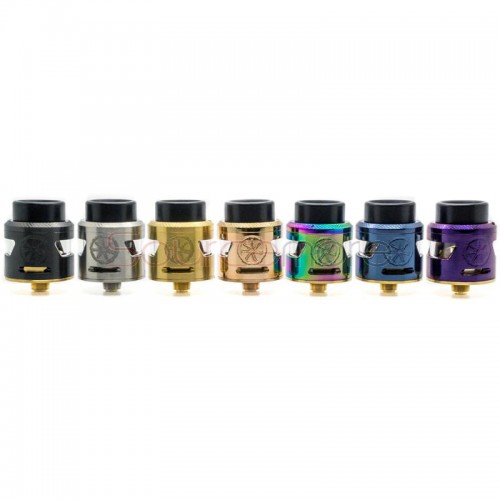 The atomizer in my possession is in the color SS.

Aesthetically the Bunker is very compact, well built, with the Asmodus logo engraved at the top of both airflows.

The two windows that obviously resemble those of a Bunker, allow you to catch a glimpse of the condition of the cotton without having to slide of the barrel.

The pin is a bottom feeder, it is very prominent and gold plated, like the spare ones.

Taking off the bell, you gain access to the deck.

It is very clean, as del as it should be, with two turrets that, in addition to housing the clamping screws, are used to channel the air flow, which rises from the bottom, and then hits the coil laterally.

The airflows are located on the sides of the coil, but positioned slightly lower in an asymmetrical position, the center of the air flow will not therefore hit the coil centrally, but more towards the sides.

To regulate the air flow, simply rotate the cup, which is equipped with limit switches via two teeth at the base of the barrel, which must be matched with two grooves on the edge of the deck when the atomizer is mounted. These steps are required to properly close the RDA Bunker.

To remove the glass, simply unscrew the top cup.

It is very easy to build and ad cotton to, with the obligation to cut the legs of the coil flush, the risk is not so much a short circuit but ruining the slide. You need to pay attention to this.

I built it with different configurations always on 3mm bits, but the preferred build is an Alien Clapton Clapton of 316L 0.3 + 0.8 * 32 with 5 coils, using it between 50 and 60w depending on the liquid used.

The equipment is excellent, although I would have preferred an additional drip tip, perhaps with a smaller hole.

As I have written other times for similar atomizers, the fact that it is a 24.5mm makes it to my taste aesthetically very pleasant, when mounted on dual battery box mod or however on a large box mod.

The pull is very soft, the air flow is easy to adjust, the steam is very dense and full-bodied and the aromatic yield is remarkable.

It is also practically impossible to over squonk.