Today I am happy to tell you about the Vapefly Brunhilde SBS 100W Mod. Vapefly with the collaboration of the German community enters the SBS market with a MOD made using the 5-axis CNC carving process.

Brunhilde SBS features some beautiful laser engravings and gives a great eye-catcher with its Old-Style Germanic look, can accommodate atomizers up to 26mm in diameter and accepts a 21700, 20700, or 18650 battery with adapter. Its chipset communicates with an OLED screen placed under the base and is equipped with Variable Wattage, TC and Bypass modes.

First impressions:
The beautiful laser-engraved decorations on the aircraft-grade aluminum body of this SBS Mod bring back to Brunhilde the Queen of Iceland who in Germanic mythology was relegated by Odin to sleep perpetually engulfed in flames on a high cliff surrounded by helmet and armor. Only a fearless hero can awaken and free the queen from the spell. 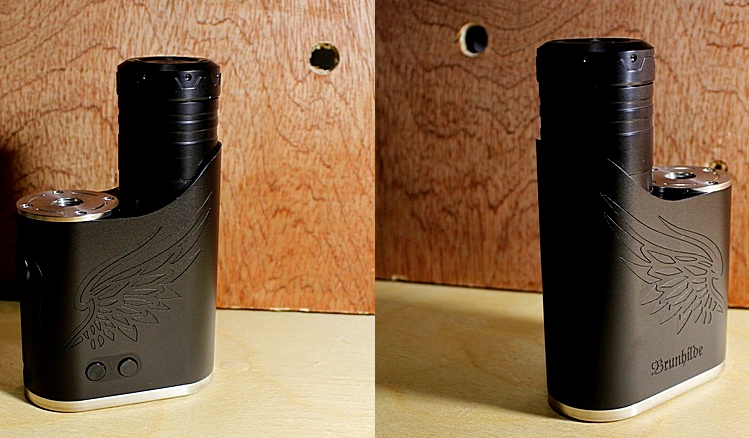 After briefly telling you about the introduction of this "fairytale" I like to notice the balance of shapes without sharp edges of this Vapefly project. This is a very compact SBS Mod (if you take into account) that can accommodate a large 21700 battery, also the weight contrary to what you might think is contained in only 143g without battery. The materials of which the Mod is made are CNC machined and the aluminum body is well blended with the steel battery tube that recalls in the decorations the shapes of an ancient tower of the medieval period. All this translates into a Hi-end looking device, elegant, robust and rather ergonomic.

Side view:
Reasoning with imagination, the laser-etched "wings" on the sides of the Mod should represent those on the queen's helmet. Under the "wings" on one side appears the writing Brunhilde while on the other side there are the adjustment buttons "+ and -" which are quite protruding, round in shape and free from anomalous movements.
The frame with the gently curved upward connection of the "tower" is aesthetically successful. Front/back view:
On the front we find the engraved design of the helmet of Queen Brunhild which incorporates the Fire key. The key conveys a good feeling and is slightly protruding, made in the same color as the frame is also pleasantly "camouflaged".
Below the representation of Brunhilde's helmet is the USB-C charging socket to be used (as I always recommend) only in an emergency, this port supports a charging speed of 2A and pass-through. The profile of the rounded handle is well connected in the upper part with the steel tube battery, the shape of the "handle" and the CNC machining of the tube transmits overall a good feeling with the hand.

Bottom/top view:
On the bottom, inside a stainless steel plate screwed to the Mod by means of 4 French screws, there is the 0.91 "Oled screen in a recessed position. As seen on other SBS devices, the display is also on Brunhilde been positioned on the bottom of the Mod mainly to contain the overall dimensions and to leave free field to the beautiful side and front decorations present on the body of the Vapefly device. On the monochrome display, there are luminous and clearly legible characters, the following data are present and can be consulted; battery status indicator, coil value, watt, volt, temperature ( TC when set) or Bypass mode.

It is therefore an "essential" chipset that does not show some and non-vital parameters such as; length of the last puff, puff counter and percentage of residual charge of the accumulator. Just to give free rein to unfortunate battery problems, 6 vent holes are obtained on the bottom of the mod. The stainless steel cup is anchored to the mod via 4 torx screws and contains a gold / plated floating pin, the cup can accommodate atomizers up to 26mm in diameter without them overflowing or interfering with the battery holder tube.

I find the battery-holder tube (made of stainless steel) very aesthetically appealing and guessed; do you remember the fable of the queen relegated by Odin to sleep engulfed in flames on a tower (or cliff depending on the interpretations)? Well, the cap recalls with its engravings the "blackbirds" of a tower and in the upper part of the cap as well as 3 large vent slots, we find the "flames of hell" that in the legend enveloped the princess during her sleep.

Choice of battery:
As anticipated (Brunhilde Mod) offers a wide choice of accumulators, in fact it can accommodate a 21700, a 20700 or through the plastic tube-adapter decorated a "small" 18650 cell. As a reference, the positive pole (+) is marked on the bottom of the compartment, the positive pole (-) is present on the inside of the cap.

So far so good, very good indeed ... Provided you can overlook a rough thread that can create some squeak or hardening during the removal or insertion of the battery cap. Nothing to worry about, but it is certainly not the best thread so far encountered during my vaping device tests. I have tried all three types of batteries and have not found any abnormal movement inside the box. Choice of Tank :
Previously I told you that Brunhilde can accommodate atomizers with a maximum diameter of 26mm (official data), however, I managed to use my Hell Vape Launcher by Wirice which with the convex glass reaches 28mm in diameter and touches the pipe profile. Of course, below 28mm in diameter, you can use any tank with a good aesthetic result such as Innokin's Zenith-2 or small 22mm tanks for MTL which if they are too low you must logically use a drip-tip long enough not to find the battery-holder tube in your mouth. The difference in height between the 510 cup and the battery cap is quantifiable in 35mm. In TC mode , degrees Celsius can be adjusted in 1 degree increments between 100 and 315 or in 5 degree Fahrenheit increments between 200 and 600 degrees.
The By-pass Mode automatically detects the installed resistance and you don't have to adjust anything! Naturally, the By-pass mode simulates a mechanical behavior and the power curve drops as the battery is discharged. Final thoughts：
Brunhilde SBS offers first-rate materials and workmanship, only the thread of the battery-cap did not please me. From an aesthetic point of view, Brunhilde Mod is a simply stunning Device with truly captivating graphics, particularly relevant and evocative of the origins of the traditional Germanic legend that I briefly mentioned during the review. The various engravings and decorations are among the most beautiful I've ever seen on devices in this price range.

With the atomizer of your choice installed the dimensions of Brunhilde Mod SBS are really small and comparable to much smaller traditional kits, also calculating that it is possible to install a large battery 21700 Brunhilde Mod is really interesting for many Vapers, regardless of whether they are fans MTL or DL .

Regarding the weight, in my opinion, it is necessary to make a reasoning; if we look at Brunhilde from the point of view of a single-battery device it will certainly be heavy to carry, but not if we compare it to other CNC machined steel SBS creations. So from this point of view we can safely say that Brunilde SBS is not only ergonomic and compact with its 143g but also light. The presence of the aeronautical aluminum alloy played a fundamental role by reducing the steel parts and maintaining excellent structural solidity.

The VW mode chipset performs flawlessly with good Fire responsiveness and provides good performance with DL atomizers. Adjustments to the tenth of a watt for MTL users are important and Brunhild supports them. The indications of the resistive value to the changing of the tanks always appear quite precise and also the battery management seems to me worthily supported by the "3S" circuit of Vapefly.

Some data is missing on the display such as; the percentage of charge remaining, the number and the Puff counter. The TCR option is missing which frankly (on a device of this price range) you can easily give up rather than having an approximate one and not up to a much more expensive DNA circuit.