Earlier, Lost Vape already released a system called Orion，a review of which we also recorded. And now the continuation of the line is presented - Lost Vape Orion Plus.

The main difference is in the cartridges. If the first one worked on non-maintenance, then the second one changed the design and added compatibility with replaceable evaporators.

The tank body was also changed in order to more conveniently monitor the liquid level. In addition, the device designed as well as updated firmware for the DNA Go board supporting two warm-ups. And now let's look at the system in more detail.

Lost Vape Orion Plus is a system consisting of a battery pack and a cartridge with an evaporator. Management is via the fire button. There is an option to change voltage. The device works on replaceable evaporators and it is available in 15 different colors. Charges at a current of 1 A.

The drip tip is made of black plastic and equipped with a ring for adjusting the tightening. Custom drifts cannot be used with this device.

The body of the Cartridge is completely made of transparent plastic. It holds 2 ml of liquid. The cartridge works on replaceable evaporators. Two types are available for sale and kit: coil on a 0.25 Ohm grid and on a 0.5 Ohm ordinary wire.

Evaporators are made on a special platform, which is simply inserted into the Cartridge. For refueling, there is a hole on top where most bottles can fit. It is closed by a lid on the thread.

Additionally, it is possible to update the firmware to gain access to all power modes. To do this, you need to find the necessary software on the manufacturer’s website. The cartridge has a completely transparent body, which will better track the remaining liquid. 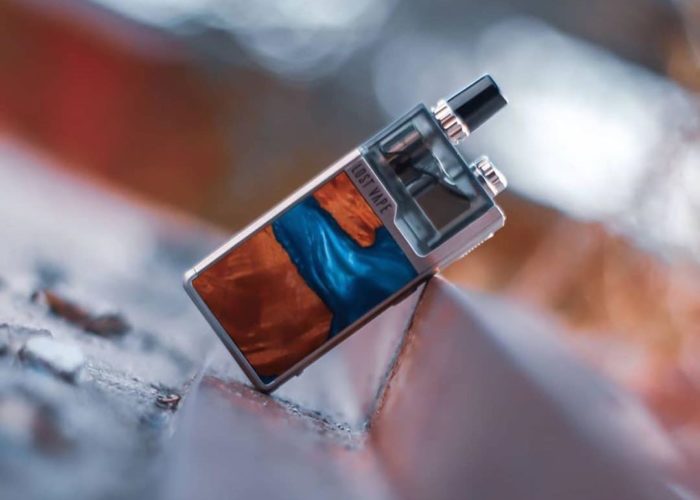 In addition, knurling appeared on the airflow adjustment ring, so it is possible to more precisely adjust the airflow. Well, we already mentioned replaceable evaporators.

On the mesh coils, the puff in all the settings will be tighter than the hookah, but looser. But the 0.5 Ohm evaporator gives a nice tight draft. There are no complaints to the taste, both coils give a good taste transfer. One can only expect when the company will present the RBA base for a full set.

The replacements (evaporators) live for a long time after 10 refillings the taste does not disappear. But the complete drip tip cannot be replaced. Let it be possible to find it in other colors, but it does not become convenient from this. The design of the bundle has remained unchanged, the device still looks like a walkie-talkie from old films.

Some may not like this. Additional nitpicking is the location of the Fire button. It is in the middle, and you have to get used to a specific grip. There are no complaints on the board, everything works quickly and stably on the latest firmware. A set of five power modes allows you to set a comfortable temperature and steam saturation.

It is difficult to consider this device as a replacement for the first version because of backward compatibility, but as a separate device it turned out to be premium for the system.

- inconvenient complete drip tip without the ability to replace with your own,

- the blower adjustment ring and the steel-colored cover are not always combined with the design of the battery pack,

- design of the device in the form of a walkie-talkie,

- the possibility of flashing the first version to obtain the functionality of Orion Plus,