Another novelty Drag Max from the Pod Mod family. This class of vaping devices is now rapidly gaining popularity, because the main thing here is ease of maintenance. In fact, fill up the liquid and change the batteries, but there are also RBA bases for advanced vapers . Let's go to the review, find out more about this gadget. 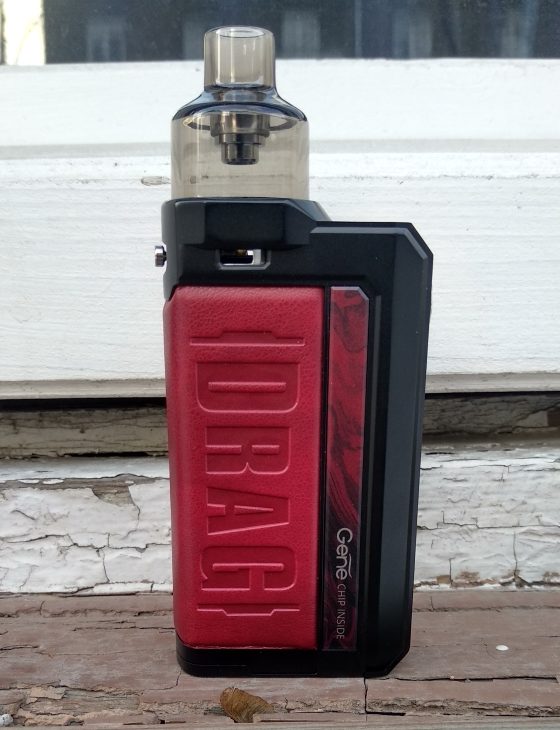 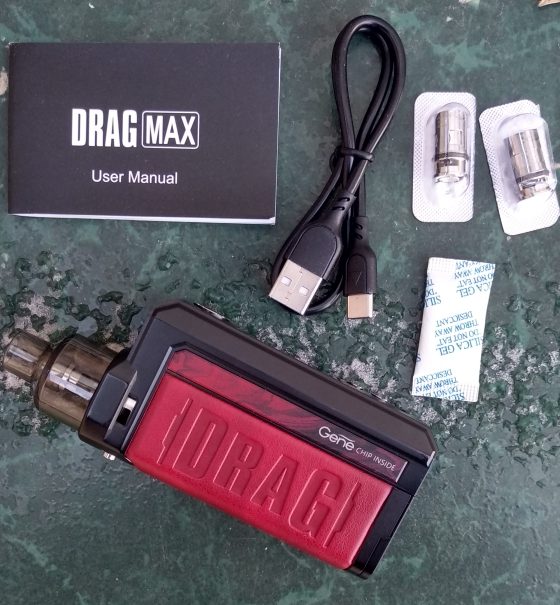 There is also a limited configuration, which can be found on the company's official website 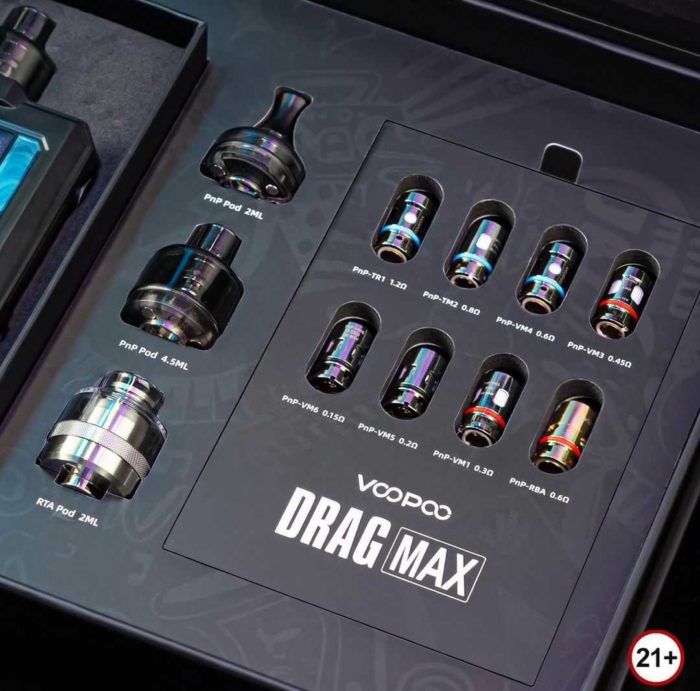 Information for information
Voopoo Drag Max is made of zinc alloy and plastic. It is presented in 5 colors: classic, retro, galaxy blue, vintage gray, marsala, but there are also multicolored prints on the official Instagram of the manufacturer. The GENE.FAN 2.0 chip is installed inside for power up to 177 watts with resistances from 0.1 ohm. The usual PnP vapor is used inside the cartridge. A limited-edition was presented separately, which comes with 8 evaporators, 2 cartridges and an RBA Tank. 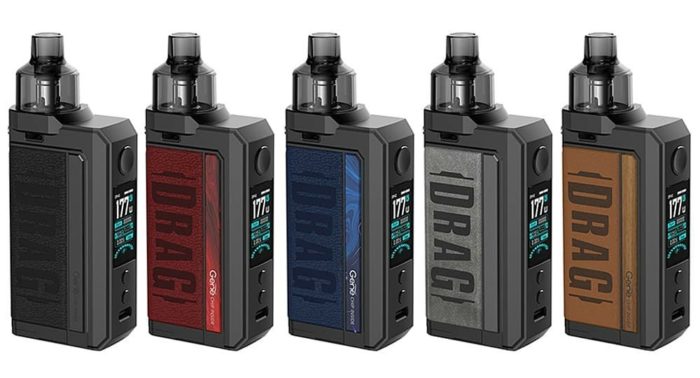 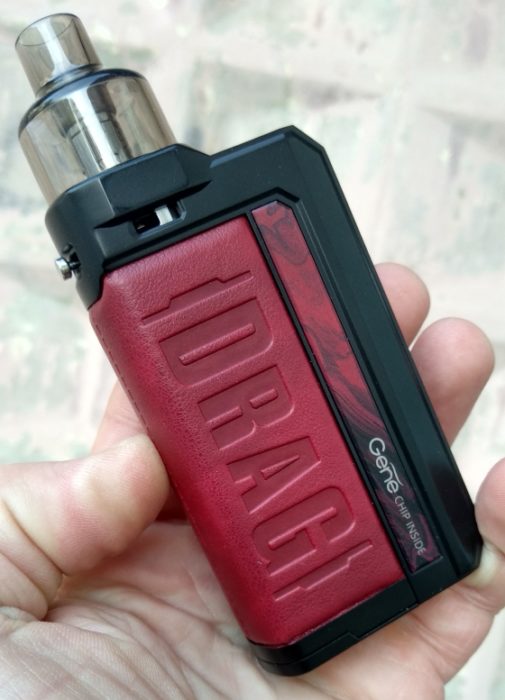 Tank and evaporators
The set includes the already familiar PnP pod, which was found on Drag X, Drag S or Drag Argus GT. 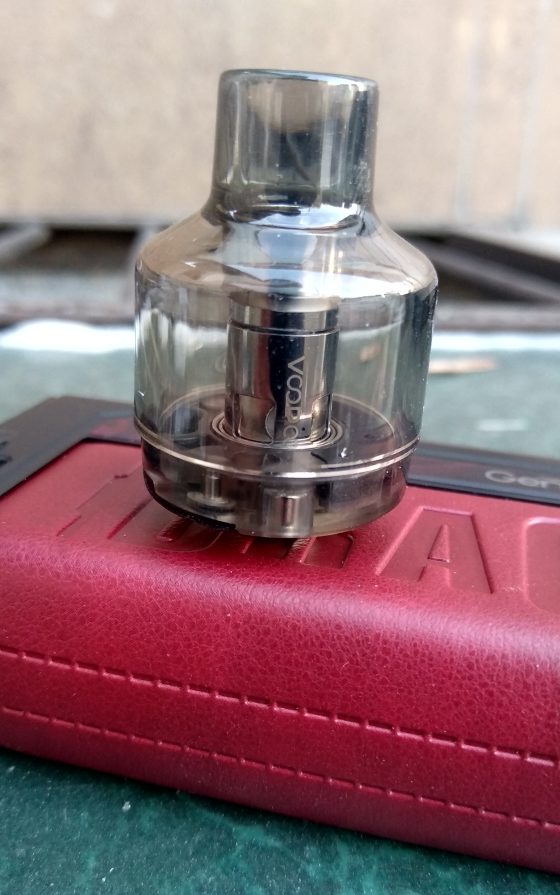 The body of the tank is made of translucent plastic with a non-removable drip tip.
The volume will be 4.5 ml. The set includes coils PNP VM5 for 0.2 Ohm and VM4 for 0.15 Ohm. 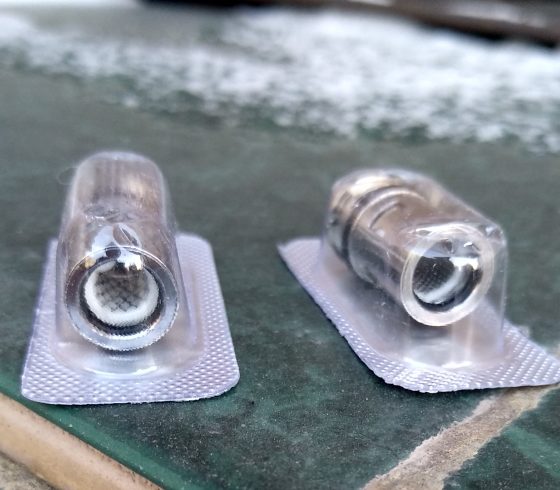 The rest of the coil is also suitable. In addition, you can use the PnP MTL pod with a reduced volume of 2 ml and a narrow drip tip. The tightening is adjusted using the slider on the box body. 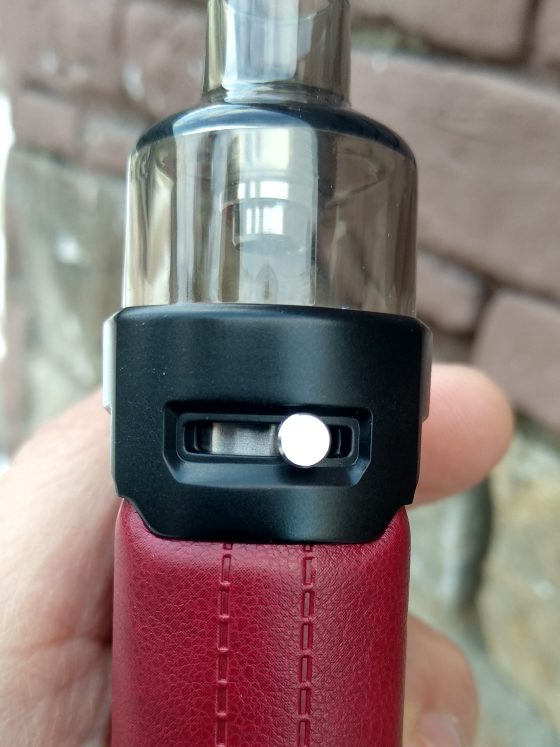 Refueling is carried out at the bottom of the tank, you just need to move the rubber plug. 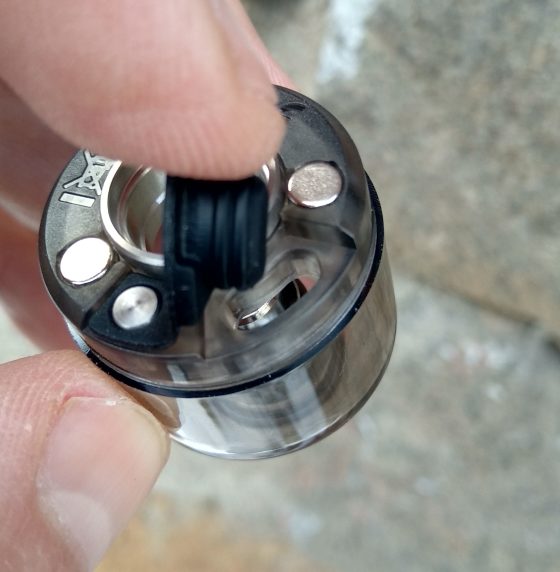 2 variants of RBA bases
For Drag Max, the manufacturer has provided an RTA on a magnetic connector. The stock drip tip is transparent, with a wide nozzle. The site is typically wide, but due to the design it will be difficult to find a replacement. The body of the tank is also transparent and holds 2 ml. The filling is located underneath the plug. If you put the cotton wool correctly, then there will be no problems with such a lower dressing. Two stands with side cuts are provided for the installation of the spiral. The base itself is made according to the GTA system, with raised racks. The blowing nozzle is quite large, so it makes no sense to put small coils. Therefore, for the sample, set the Quad Alien to 3 mm 5 turns. And the coil should be wound counterclockwise. Since the dome is as close as possible to the racks, on complex spirals you have to play with the ends in order to assemble the tank. Well, due to the magnetic connector, the tank is scrolled, 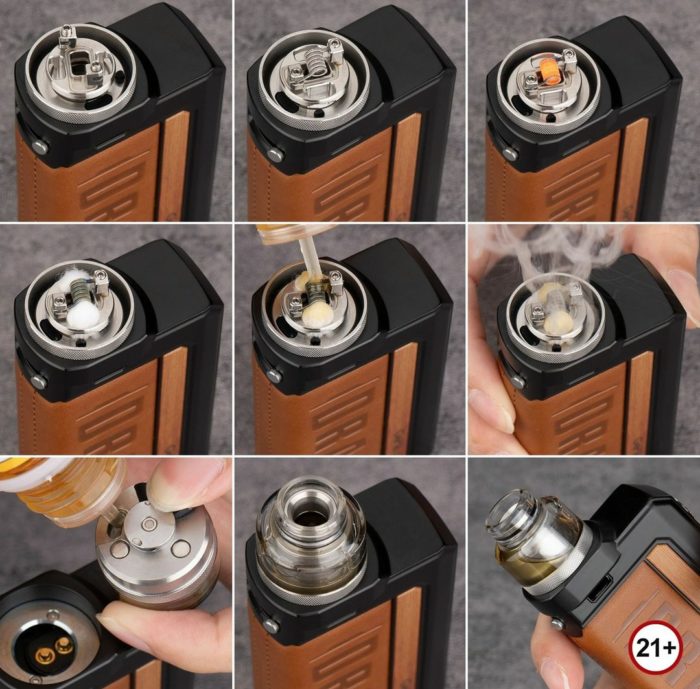 And for complete cartridges, you can buy PNP RBA. There is no adapter for it, so you have to wind the canopy. For the installation of the coils, a postless base with side screws is used. The holes are small, so we put a small MTL fuse with 2.5 mm 5 turns. The slot screws are small, so clamping the coil is not very convenient. And now the funniest thing with this winding is burning. You can put it in a cartridge and try to drive the COZ through the drip tip. Or, use tweezers to press the base against the mod and try to burn the coil. The occupation cannot be called safe and convenient, therefore, space coils from a mono-core are suitable for this RBA base. And if we talk about a normal suitable RBA, it is easier to buy the same format from Mechlyfe for tight traction. So the spacer with the 510 connectors will be, and the stands are more convenient. 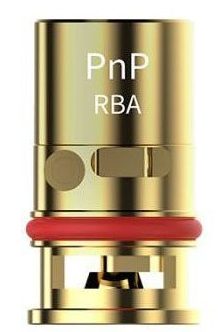 Pod Mod, board work
In appearance, this "box" has not gone far from its predecessors, the S \ X versions. Above is a magnetic connector for cartridges and airflow adjustment. 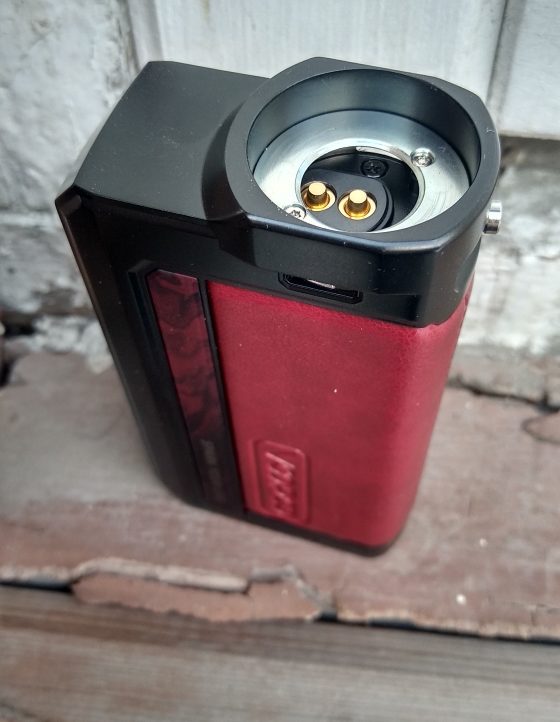 510 connector is sold separately, even for the limited edition. The metal frame has received a matte finish. And the side and back faces also received a soft leatherette insert. 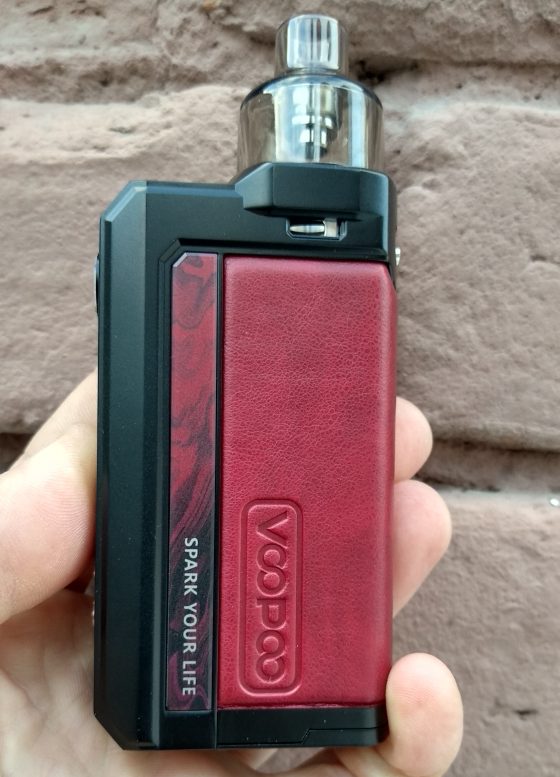 The front panel houses a convenient Fire button with a notch for a finger, a large color screen, adjustment buttons and Type-C for charging.

Below is a sliding battery cover with a latch. It dangles slightly to the sides, but the batteries sit tightly inside. 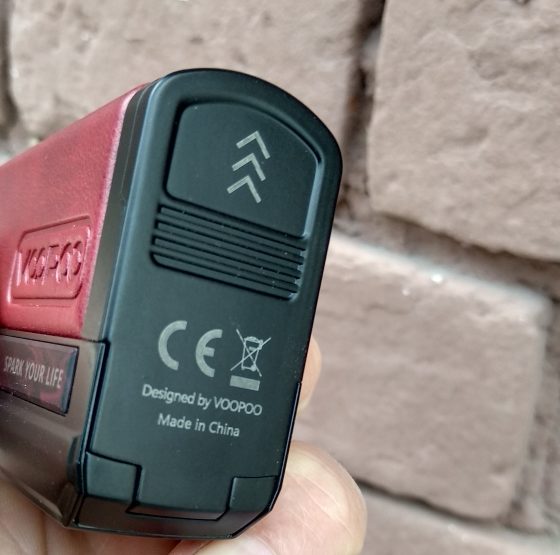 But there is a small gap with the batteries installed. GENE.FAN 2.0 board is installed inside. Since the developers are positioning this device as a Pod Mod, its functionality is modest. The main screen shows the power charge for each battery, puffs counters and timer, resistance. 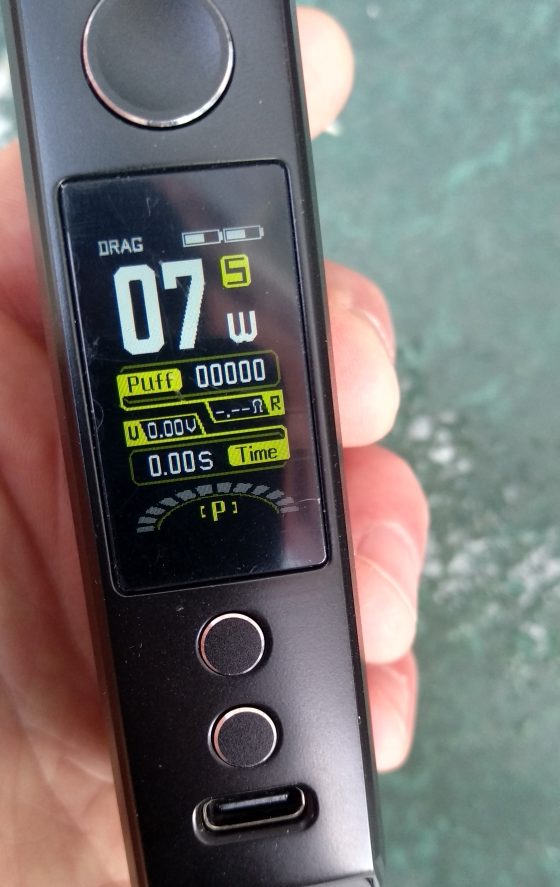 Among the modes, there is the usual variant and automatic power adjustment for resistance. The change takes place by pressing the Fire three times. To change the color, hold down plus and Fire. 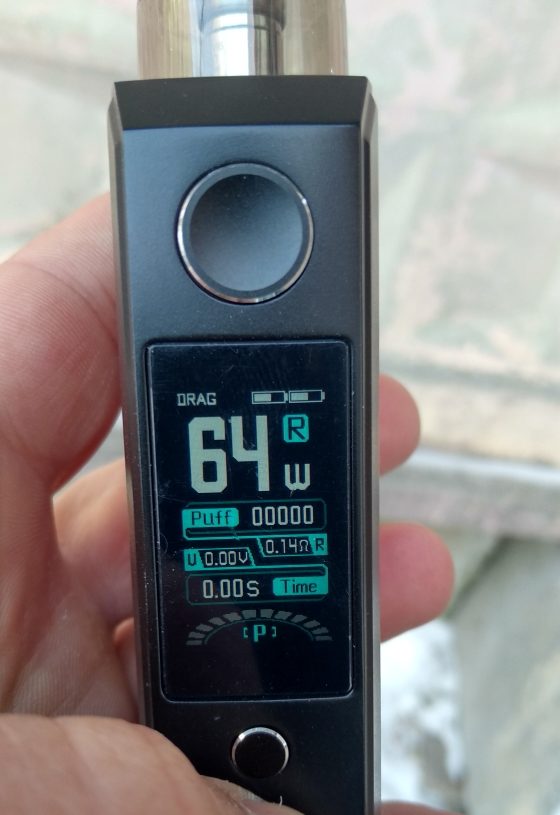 Puffs are reset by a combination of Fire and Minus. If you hold down both adjustment buttons, you can change the theme (screen orientation). 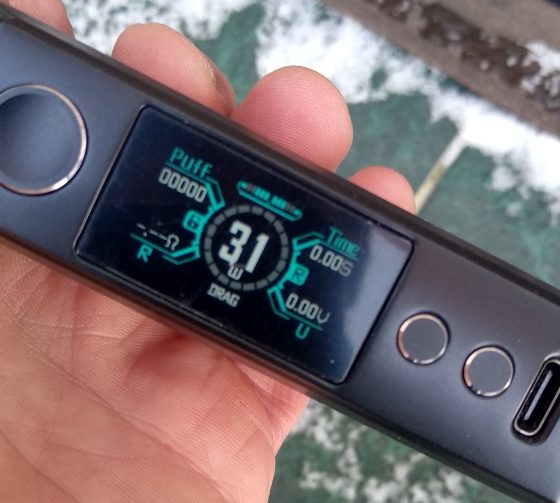 Also, the board itself produces from 5 to 177 watts with a maximum current output of 35 A and raises from 0.1 ohm. The charge current will be 2 A. But in fact, we get 1.2 A at the peak, and if there is an imbalance in the banks, it will equalize them until they are fully charged with a current of 0.2 A.

User feedback
There is nothing special to say about the complete coil. This is not the first time we meet them. And the new VM5 and VM4 on the grid do fine with the flavor. We also mention that MTL under, due to the narrow air duct, sometimes spits, so after idle time, you do not need to make a sharp first draft in order not to get burned. 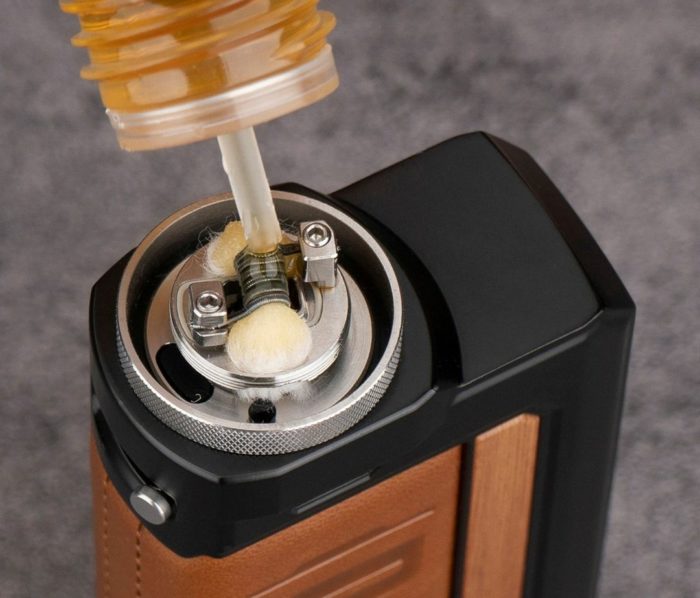 For the RTA pod, we set 80 watts. There is a lot of steam, to taste due to its size it resembles a single-coil drip. But the volume of 2 ml leaves very quickly. In general, it turns out quite interesting, and it is relatively easy to wind if you correctly cut the ends of the spiral. Now PnP base. In terms of tightening, it resembles the many times mentioned Sabtank with a fully open airflow. Taste ok, but not much better than replacement vapors. But winding is completely inconvenient. Therefore, there is not much sense in it - for free traction, there is a serviced tank and coils, and for a tight one there is an MTL tank. Or buy the already mentioned base from Mechlyfe. 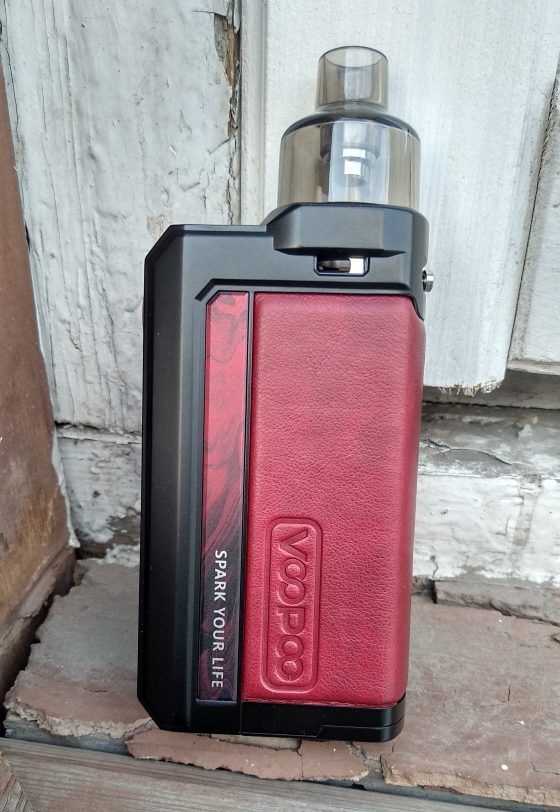 The battery pack itself is pretty well assembled. The painting holds well, the buttons do not dangle. There are small claims on the lid with a small gap. Otherwise, the mod is weighty, but it is normal in the hand. But on the board, not everything is so rosy. The functionality is scarce, charging works very strange.

Perhaps the new firmware will fix everything. Well, with a limit of 35 A, the actual power will be about 100-110 watts at peak. And the lack of an adapter for the "full" version is also frustrating. As a result, we get a well-assembled pod with a large line of vapors for those who don't want to bother too much. There is no desire to wind - there are mtl and vapor. I wanted a service - there is a magnetic tank. Therefore, the whale is still focused on beginners or all-in-one lovers.

At the end of the article, I would also like to say that Drag Max and Voopoo Argus GT are 2 devices for 2 18650 batteries, a kind of autonomous Pod Mod that will surely find their buyer. 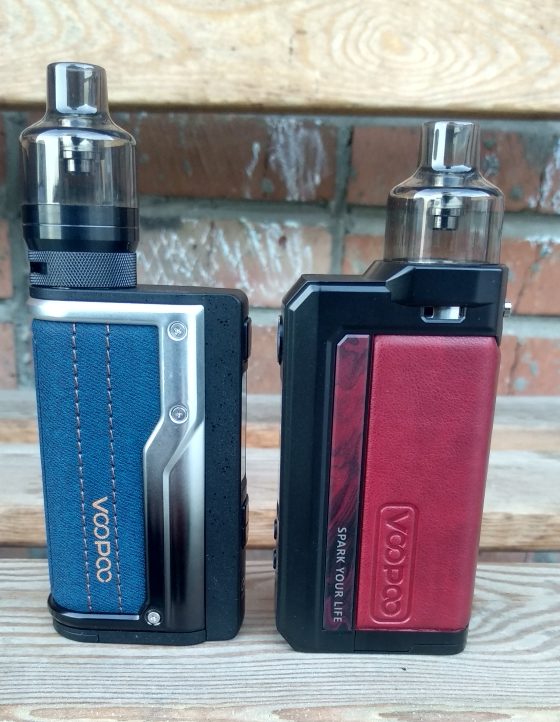 - RBA base inconvenient in maintenance,
- too small distance between the dome and the racks for the serviced tank,
- crude firmware and strange operation of the charging balancer,
- no complete 510 connector