×
Product was successfully added to your shopping cart.

Well, let's start studying the long-awaited cigarette guests. On the agenda is a universal tank from BP Mods Sure RTA, which I personally was even more interested in than the updated pioneer. However, about the latter - a small spoiler - we will also be able to talk soon. Let's get started - there is definitely something to see here.

The case is amazing, but the subject arrived from several sides at once. 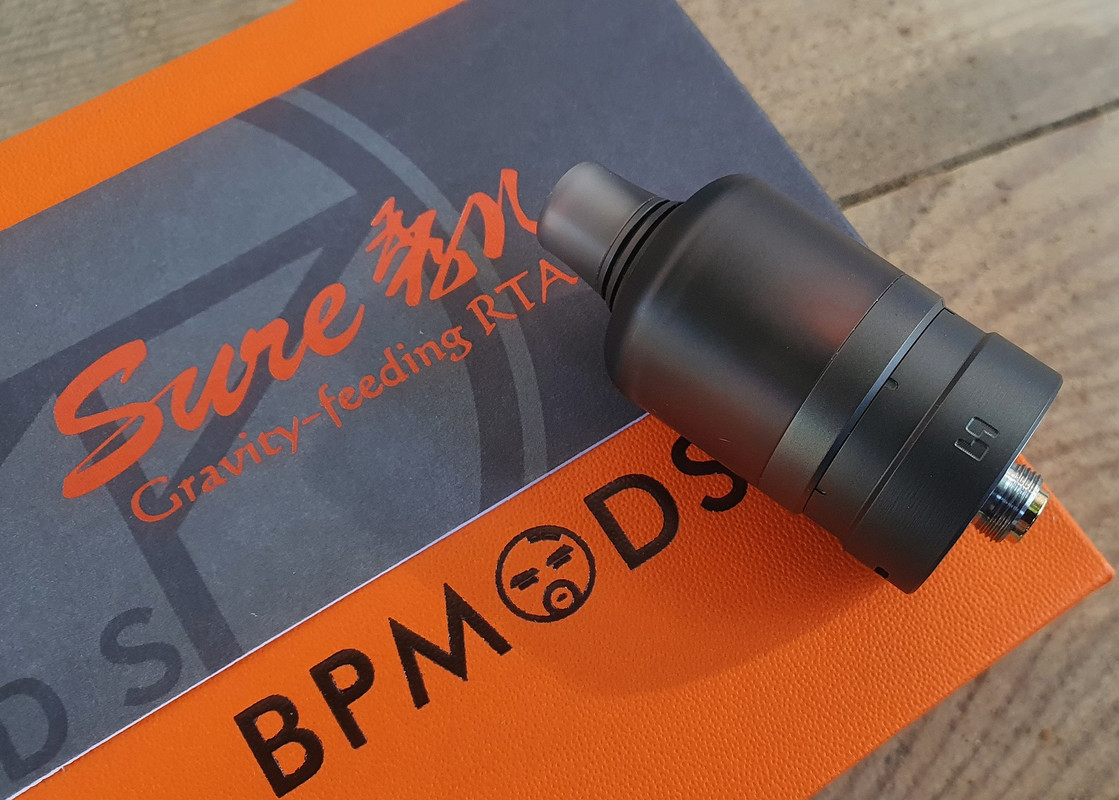 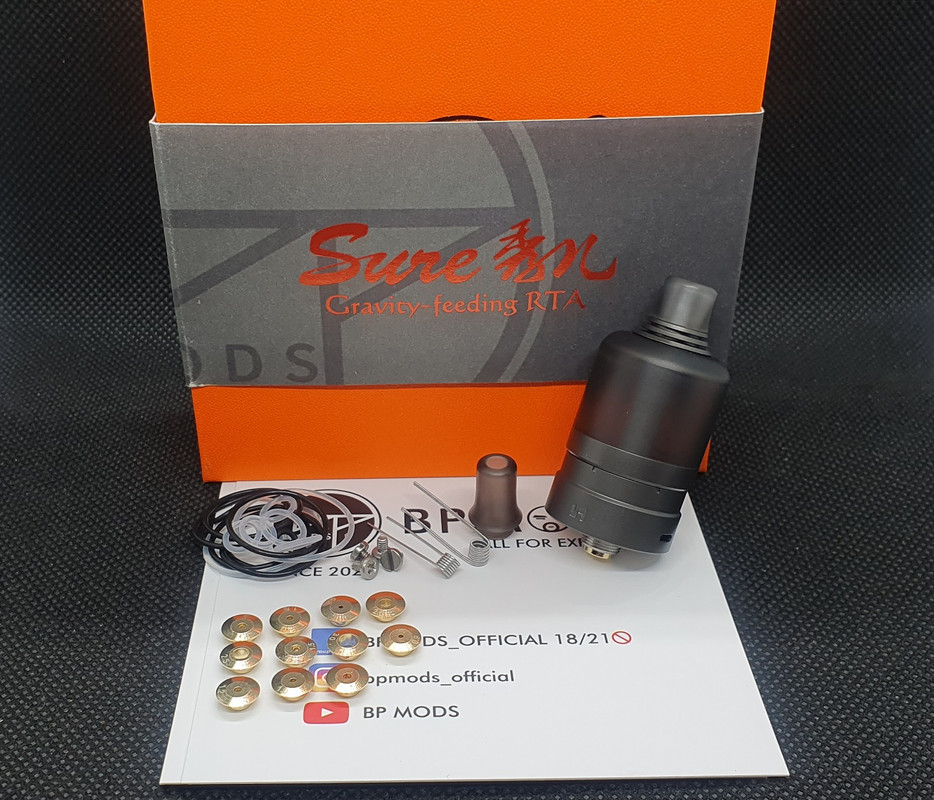 We start with the appearance and immediately state that the cut, unlike the same pioneer, is completely non-classical. The metal base and vice versa the plastic top - the contrast of materials and even colors in a certain sense - is already original. Let's immediately digress to the color - again, the developers give out gunmetal for black. And in general, the palette of colors offered is very meager, since special stages are provided - more about them later. In general, this coloring will not suit your black box mods. Back to the design – the rounded top and original drip tips complete the nice look. In general, I liked the exterior - I praise the creators - you know, at least something extraordinary among the many classic tanks. Well, the strict style is still captivating. 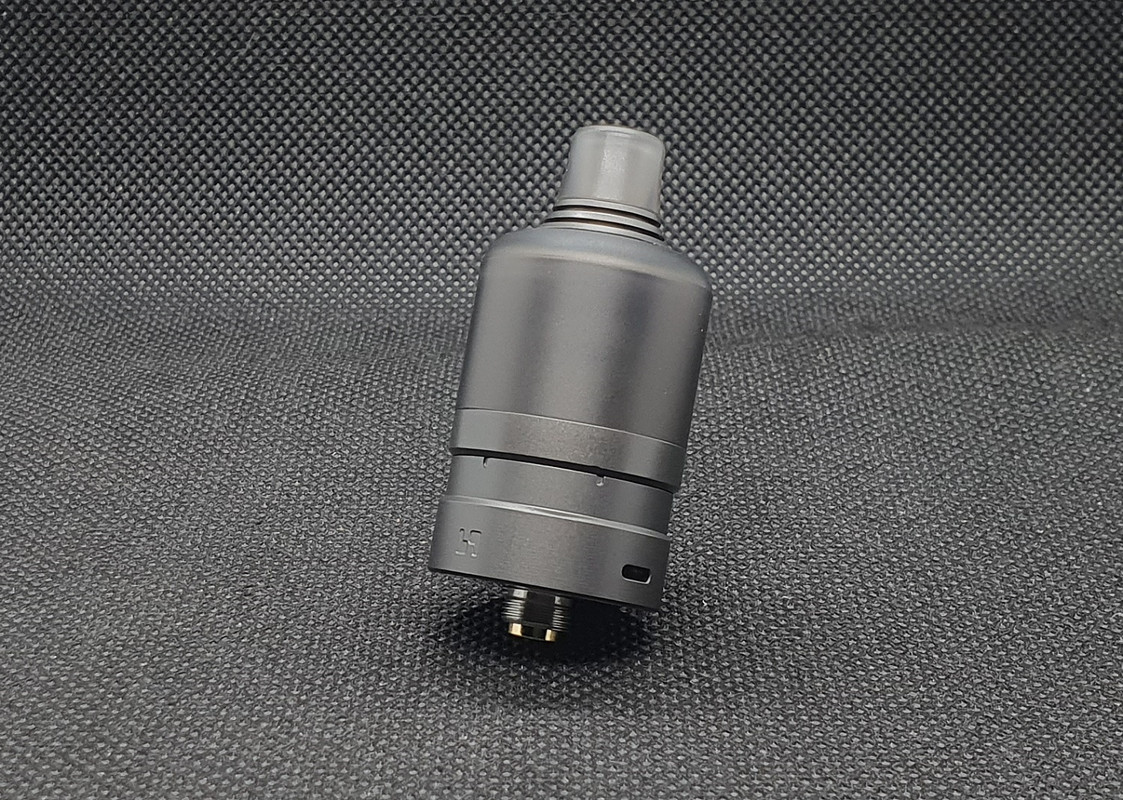 As for the dimensions, they are average for a station wagon, well, but for a cigarette man they are certainly compact. The diameter is the most classic, the height is small, in a smaller version, the tank is completely tiny.

It's time to praise the equipment - even surprising for a brand that prefers to make money on special stages. Of the embellishments, a couple of drip types, looking ahead, are just a bunch of interchangeable airflow nozzles, a couple of diverse spirals - a fuse and a monofilament. The only thing missing is a maintenance tool and a smaller flask, but we will get to know the latter later. Everything later, but later you will say - well, excuse me - I love it when everything is laid out on the shelves)

We start the study with drip types - the landing is standard 510th, the instances themselves are composite. The base with radiators is metal, the tips themselves are plastic, the fixation is threaded. If you decide to change the complete ones to your favorite copy, then there is a margin for the landing area - 13.6mm for the complete drip type, and even a small margin seems to be available. The inner diameter of the steel base “nipple” is 3.9mm, the hole in the low drip type is identical, but in the higher specimen it is already 3.5mm. Both specimens are quite decent - I did not notice the jambs behind them. Naturally, I liked the cigarette version more, as it is the most suitable for MTL, and it is more pleasant to hold it in the mouth because of its smaller diameter. 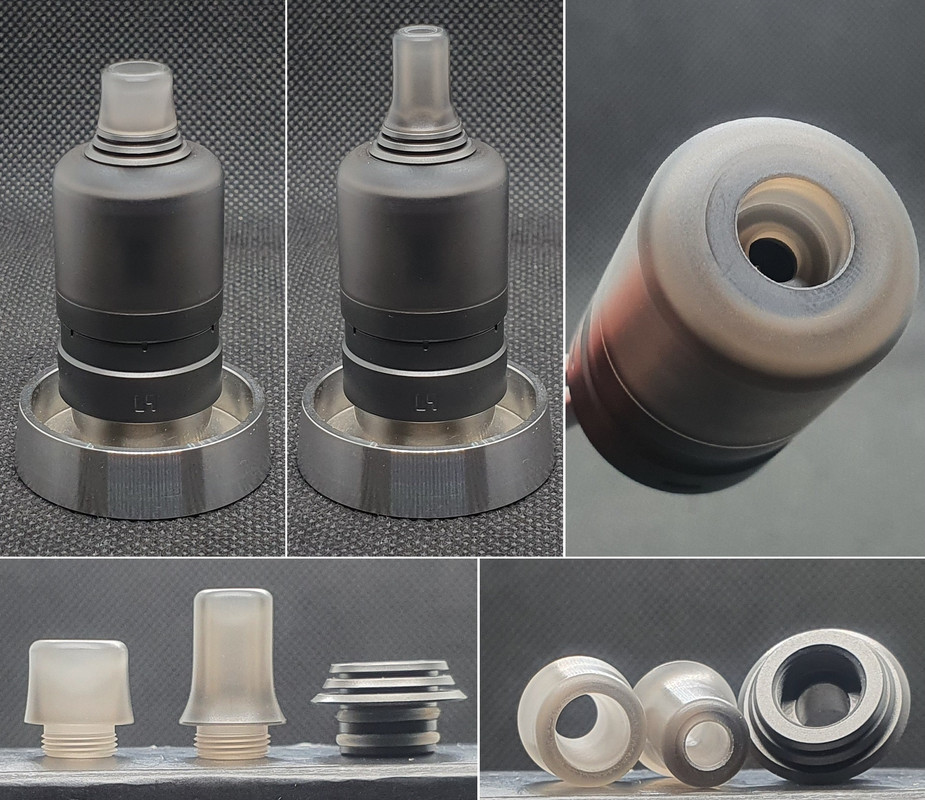 Refueling is lower - alas, this is the design - however, this does not create problems, but on the contrary, it adds useful options. The upper part is held securely in principle, fixed with a lock like a bayonet system. The internal processing of the dome is spherical, the shaft diameter is 4.2mm. The filling holes are of sufficient size, plus there is a side - the slurry that has not got inside will not go anywhere. The first useful feature of such a solution is the clogging of the holes for supplying liquid to the evaporation chamber - when the top is screwed on, nothing will be squeezed out or suffocated. As you guessed correctly, the liquid is supplied from above through a pair of small holes with a diameter of just over 2mm. As far as I understand, although inserts are noticeable in them, and in the latter you can even see something like a thread, they are pressed. That is, they cannot be changed.

Here we come to the second useful feature of the design with bottom filling - control of the fluid supply. The manufacturer prudently left hints on the dome for convenience, however, they are executed very small. So, we have three positions - the extreme right - the feed is completely closed. Aligning the top line with the center one opens the tank for refueling. Well, and the extreme left - the feed is open to the full. Adjustment occurs when turning in the interval between the left and central risks. For convenience, the developers left a notch here too (a noticeable click when moving), the position of half-covered feed holes. By the way, the central position is also equipped with a notch to “prevent” unintentional opening. In general, everything works fine - the feed is adjustable, the setting does not go astray (the stroke is moderately tight), the tank naturally does not open arbitrarily, everything is intuitively clear even without “looking” at the atomizer. As for me, everything is very convenient and logical.

A few words about spaciousness - in stock it is good for such a mid-size station wagon, and even more so for a cigarette lover. It can be increased or decreased, however, replacement flasks will have to be purchased separately. I didn’t get the large one, with which the capacity becomes simply “incredible”, but I managed to study the small one. The first thing that catches your eye is, as I have already stated, enviable compactness. However, there is a nuance here - the drip type is integrated. Its inner diameter, like the high complete copy, is 3.5mm. In my opinion, it is a little short, but in principle worthy. In general, you will agree that dopa is always good, even if for a fee. 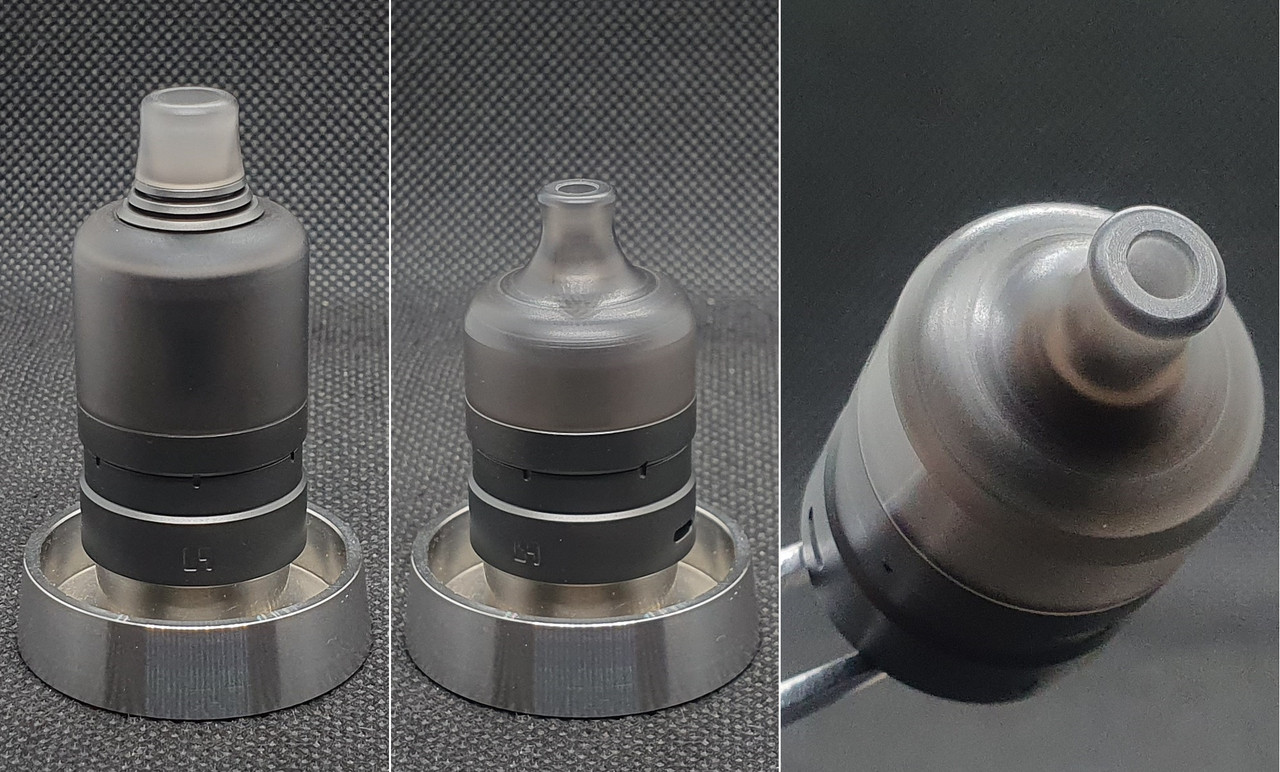 Another add-on offered for separate sale. The flask and tips of the drip types are plastic, all elements are identical to the stock ones. The only caveat is that the metal base for the “nipple” is not included in the kit. Finally, let's move on to the deck and here is almost everything, I'm not afraid of this word, "fine". We start with the racks - they are located opposite each other, moreover, they are not wide. That is, they are ready to accept medium or small coils, even the legs of a standard mtl fuse weddy bend slightly, which can be said about spaces and medium hookah specimens. The screws are comfortable, albeit under the slot, the caps are massive, there are limiters. Thus, fixing the spiral is simply a trifle - everything happens literally on the machine. 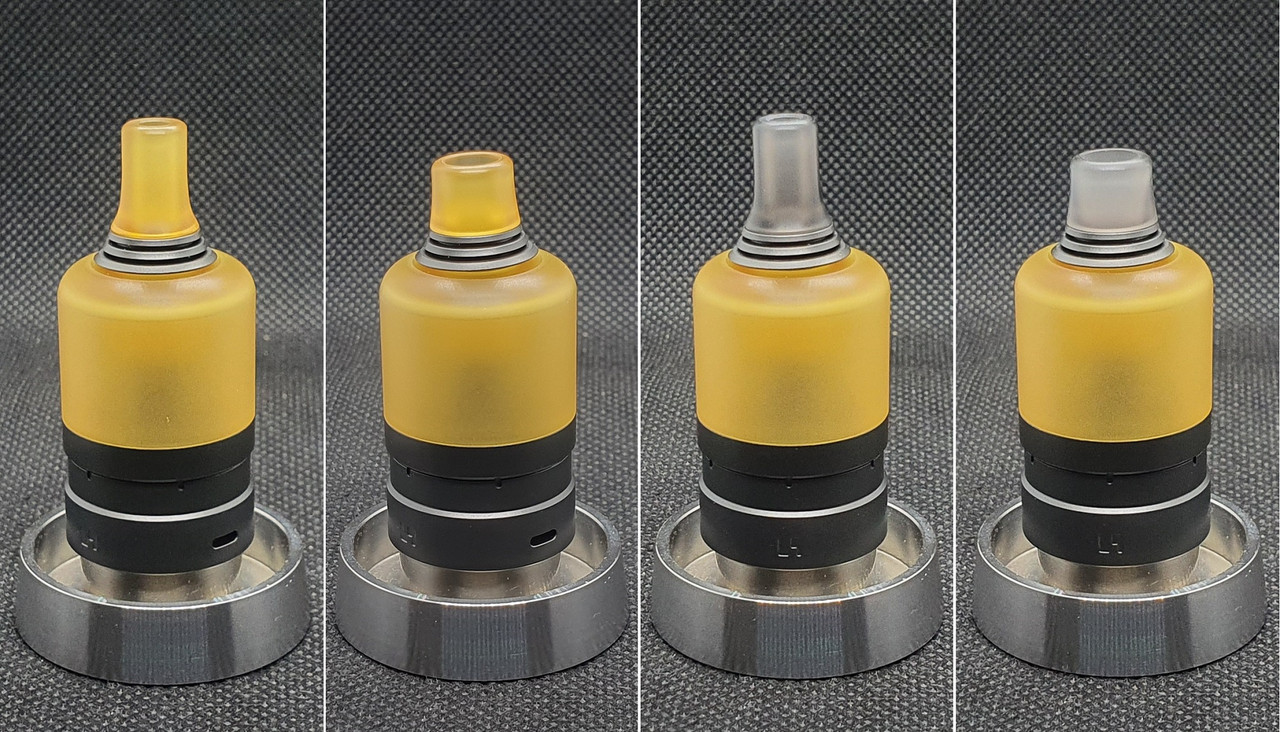 For cotton, special supports with channels are provided, which, by the way, help to center the coil during installation. The latter simply fits on them without combing and is pressed by the liquid supply nozzles from above. I cut off the ends not along these racks, as the manufacturer recommends, but along the inner border of the deck, so that the tails laid on the bottom would somehow collect condensate. By the way, what about the latter - during the day with moderate soaring, there are no squishes, and even more so leaks. After a night of inactivity, a small amount of condensate got into the blower hole, but it “sucked in” literally with a few puffs. Again, during a long downtime, the supply of slurry can be completely shut off, which, by the way, I did not do for the sake of the experiment. In this way,

We turn to the airflow and here, to my great joy, it is classic - the lower one. Its intensity is regulated by interchangeable nozzles. The most interesting thing here is that the developers added 11 of these to the kit at once. Wait a minute, these are the same guys who put only 3 jets in their first pioneer - there is progress))) So, we have the following copies - 0.8 / 0.9 / 1.0 / 1.1 / 1.2 / 1.3 / 1.4 / 1.5 / 2.0 / 2.5 / 3.0mm and 4mm fully open hole. Such a set struck me personally - I have never seen such an abundance in my entire “career”. By the way, the official site promised another 3.5mm copy, but it's not available. The nozzles are held securely in the groove, they will have to be removed with the help of a “special tool” - screwdrivers, etc. There are no orings on their body, there is a rise to protect against condensate. They give literally enviable variability, 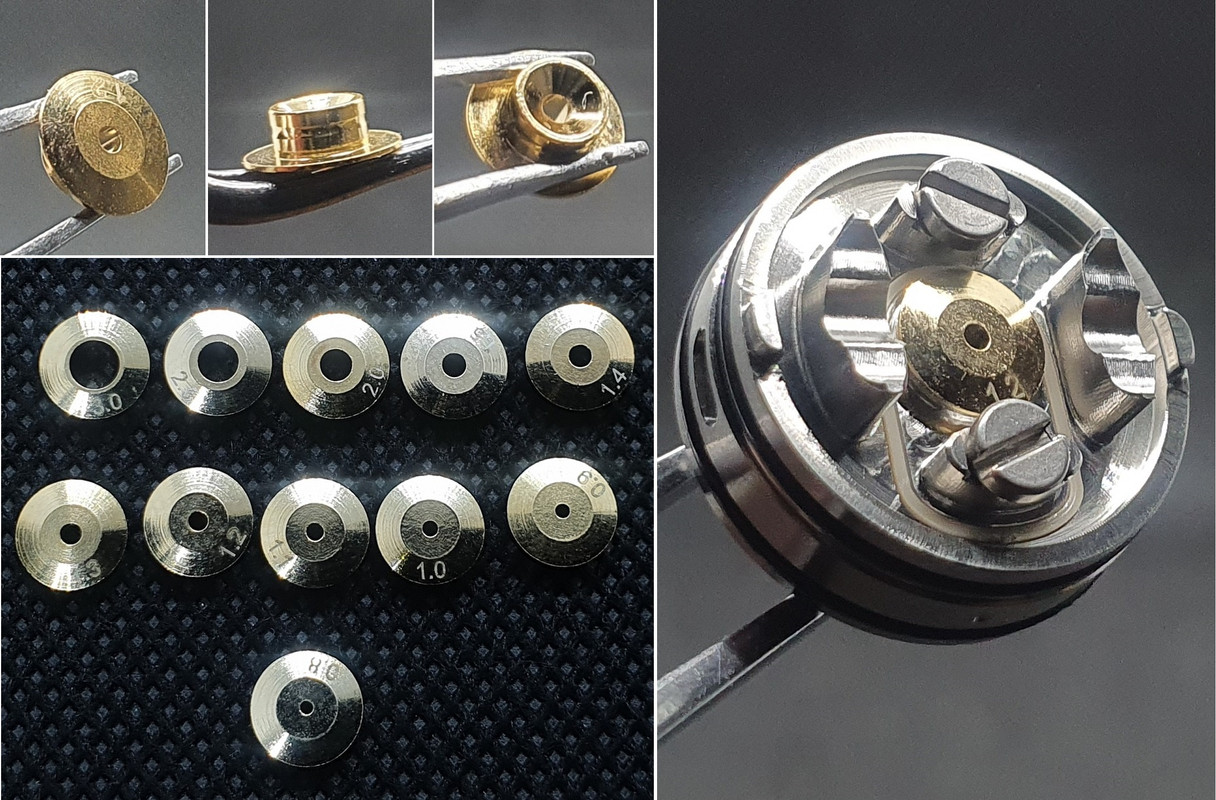 The deck sits motionless in the tank thanks to the keys and, in principle, is securely held by two orings. It has three oblong air intake holes. Therefore, the dome can be put on so that all the holes remain open. In another case, the two extreme holes are open, and the central one is clogged. It is impossible to call this method a full-fledged airflow adjustment; rather, it is a minor adjustment, which, however, is still felt. In general, the puff is moderately noisy. However, with a short reverse puff (blowing), I know that many people like to do this - how to accelerate the atomizer, a noticeable squeak appears. Yes, it's a squeak - you can't say otherwise. 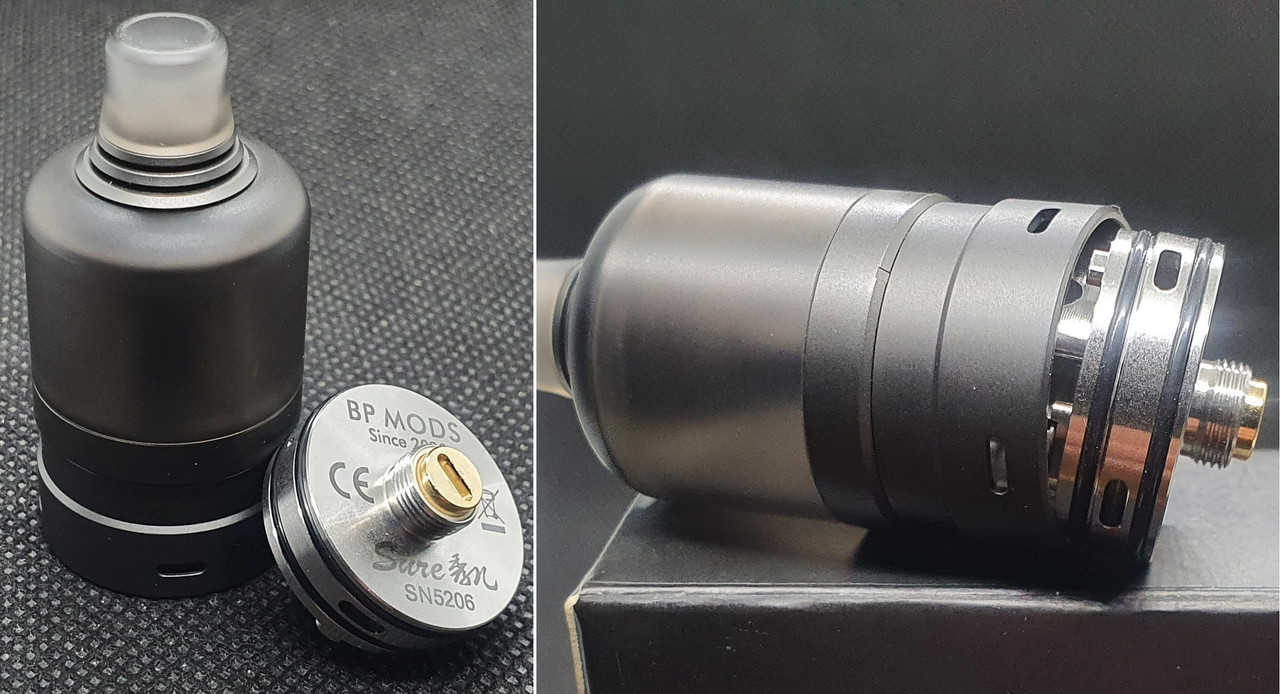 It remains to figure out the taste. As expected, he is very worthy - I simply have to note such a level in the pros. Once again I will say that this is not the most delicious cigarette that I had a chance to try, but then I repeat - the taste transfer is very good. If you want a comparison with the same pioneer, although I don’t really remember him, because I don’t use it, then it seems to me that the level is either equal, or the pioneer is a little tastier. However, the subject is good in another way - unlike the aforementioned TX cigarette box, it is higher here. Plus, the steam is wetter and richer, as if heavier, and therefore the level of smoking is better. Impressions How to put everything together - so much has been said ... 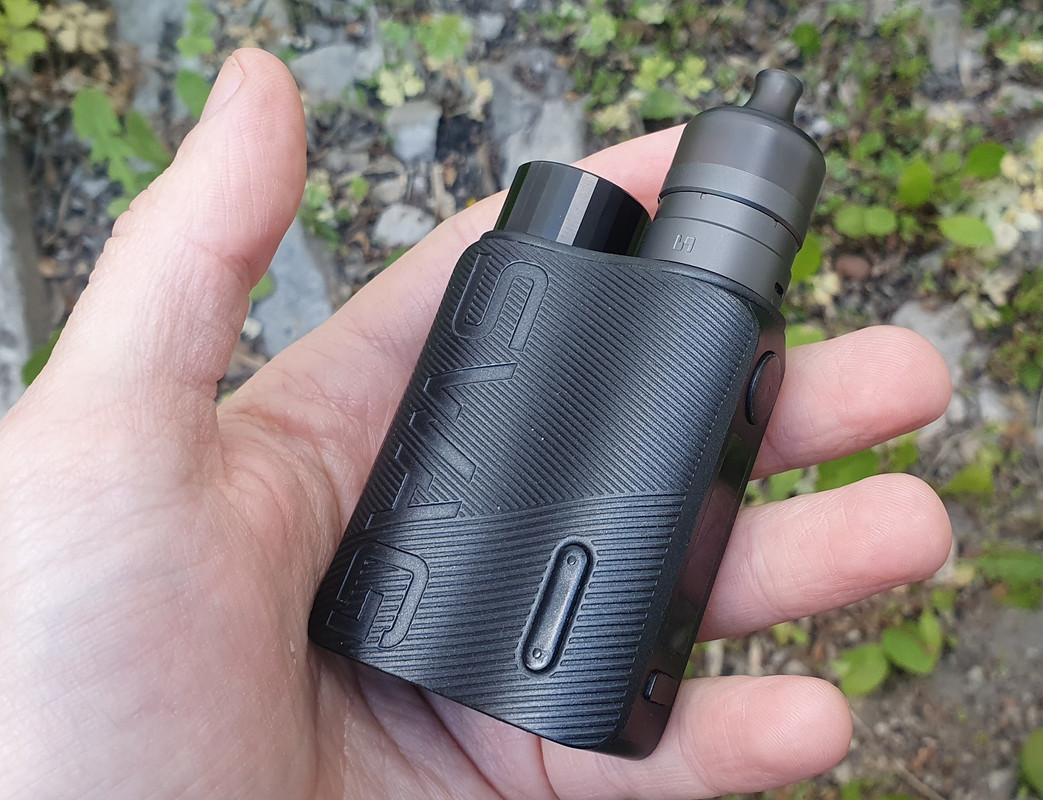 In general, I liked the tank, I liked both the extraordinary design and the quality of workmanship and articulation / fitting of elements. Additional goodies in the form of fluid flow control, incredibly variable airflow settings and special stages also cannot but bribe. Do not forget also about the easy-to-maintain deck and a decent capacity. Well, let's put a decent taste and TX level, as well as working versatility, as a cherry on the cake. Although I didn’t write down the price tag as a plus, I still consider it quite democratic for such a package and a whole bunch of tank advantages. An unequivocal recommendation for consideration when choosing this kind of atomizers. 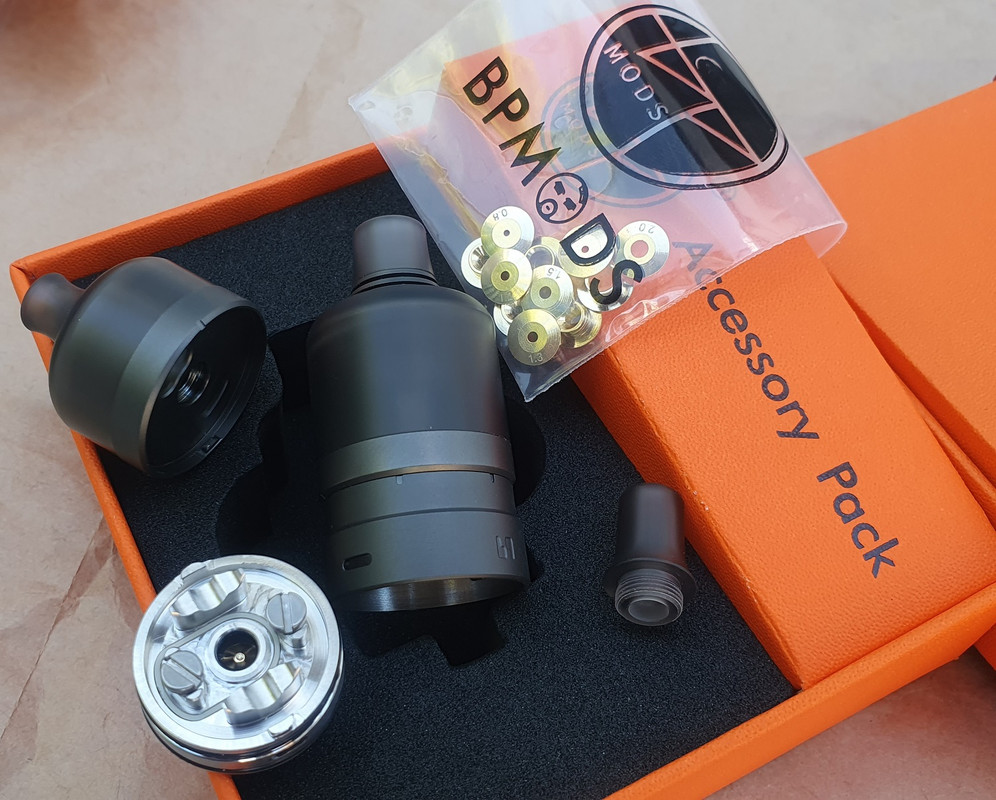 Flaws
Squeak when "reverse" tightening
A modest palette of proposed designs, plus a mismatch in “color”.